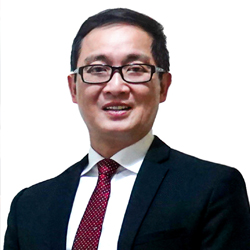 Joel Pascual is a Professional Mechanical Engineer and is currently president of Barron Engineering Supplies, an industrial refrigeration firm with nationwide operations. As a serial entrepreneur, Joel is also president of Commissary Kitchen providing back of house services to various foodservice establishments. As a publisher, he is on top World Food Magazine, the only food trade publication in the Philippines.

However, it is in the events industry where Joel has carved out his most significant achievements. With 19 years of experience tucked under his belt, he has steered PEPGroup Inc. into a leading professional events management company with some of the biggest shows throughout the Philippines. Most recently, it has become part of Tarsus Group of Companies from London, thus, it is now known as PEPTarsus Corp.

As a way of giving back to the events industry, Joel is now serving as president of the Philippine Association of Conventions, Exhibition Organizers & Suppliers Inc. (PACEOS). He is also a founding director and a lecturer of PhilMICE Academy, the only certification body in the Philippines for professional event organizers.