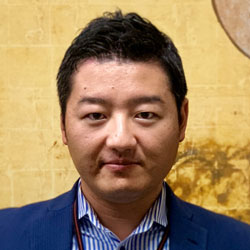 Yoshiaki Matsui is the Deputy Director of the Bidding and Promotion Division in the Department of Conventions and Tourism at the Kyoto Convention & Visitors Bureau.

He began working at the front desk of the Kobe Portopia Hotel in 2008, before taking a position in charge of attracting international conferences at the Japan National Tourism Organization (JNTO) in 2013. While at JNTO, he successfully led the bid for many large-scale international conferences such as the World Congress of Neurology (2017 with 7,000 attendees) and became involved in the Japan Tourism Agency’s promotion of unique venues, participation in overseas MICE exhibitions, and Japan Conference Ambassador Program.

In February 2015, he began working at the Kyoto Convention & Visitors Bureau, where he is now in charge of bidding and promotion, event support, and various initiatives for MICE events in Kyoto. He has succeeded in bringing the 25th ICOM General Conference (2019 with 2,500 attendees) and over 50 large-scale international conferences to Kyoto.

He was awarded the ICCA Researcher of the Month  in May 2019.